As I've mentioned this ship is a converted ferry as was obvious when boarding via the car deck. So there's no pool or anything like that.
Here's what you do get. There are 3 bars: a forward indoor bar that I'm afraid smelt bad the first time we went in so we never ventured back, a second indoor bar at the rear of the dinning deck called the 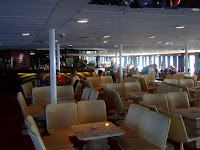 Ledra Lounge where the ship's entertainment happens, and finally the outdoor bar at the stern on the deck above the Ledra Lounge. This last bar serves the sun decks out back which are on the three levels from the bar upwards to the third small deck up bt the funnels. As it was a full ship, suloungers here were at a premium but there's a fair amount of space which the standard white plastic garden furnitur to sit outside. 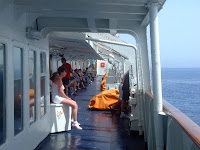 Running down the sides of the boat away from the bar towards the bow are outdoor gangways below the lifeboats where people lean on the rails looking out to sea. There is a long bench running the length of these areas for extra outdoor seating, and at the end some steps take you up to small vantage points just below the bridge. These side decks are great places to cool down as they always get the breeze as the ship motors along and at least one side will always be in shade.
There is also a small casino on board and a couple of duty free shops. The duty free seems to sell an awful lot of chocolate cosidering you're cruising to the 100F heat of Egypt, but I guess the ship itself is kept cool enough with good air-con.
The dinning room is quite nice and does have more of a restaurant feel than our hotel's canteen atmosphere. Dinner is a three course waiter service from a menu that had about three or four choices for each course. The food was much better than I expected as I had imagined a buffet style affair, so the individual service and good quality of food meant I thoroughly enjoyed both evening meals on board. Evening breakfast (which was a buffet) was much better than the hotel, although the first morning was a bit of a crush with everyone trying to fit breakfast in before the excursion (breafast being served 6 until 8 but excursion muster bein at 7). There are two sittings for dinner at 7pm and 9pm, to fit everyone in,and the doors are closed for entry 1/2 an hour after your shift starts. This rule of course collapsed on the second evening as the coaches only returned from the excursion after 8pm. At this point I was glad I was on the second sitting as many people were having to go straight into dinner after the long and very hot day in Egypt still in the same sweaty clothes and still carrying all their bags of souveniers. When the schedule works you are allocated a table (writtn on your boarding card when you embark) which you keep for each evening so you are likely to be sitting with people either just in front or just behind of you in the embarkaation queue. Of course with the late excursion return they ended up just seating people where ever they could on the second evening. House wine was only Cy£5 per bottle which is the same price as two glasses so better to buy by the bottle.
The entertainment on board was quite good, especially compared with what we were used to (or at least 'avoided') in the hotel. Two decent singers and three dancing girls who sang some greek songs together with more mainstream recognisable stuff, and dancing started with a showgirl number and also covered, river dance, belly dancing and the can-can. There is a raised platform in front of the stage area so you need to get there early for a good view, or at least have no quarms about asking strangers ifbyou can join them at their table. The rest of the bar is a couple of foot lower down behind this platorm but can see what's going on as they have a camera linking the show to the TVs in the bar - not quite the same though. 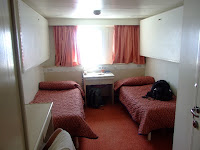 The cabin, like the rest of the ship was generally clean and tidy, and we had plenty of space for he two of us, although we had paid extra for a 'G' class twin cabin with a sea view. The descriptions of the twin bunk inner cabins sounded a little cramped, but they would save you about £100 and if you are people who are quick to get ready then you're not going to spend much time in them awake. Our cabin had twin beds on either side, with optional pull 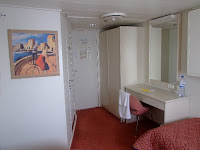 down bunks over then (so you could have squeezed 4 people into it), a twin draw bedside table between them, and then a dressing table, and wardrobe along one wall and the bathroom along the other. Sockets on board are the two round pin Euro style, so remember adapters even though Cyprus itself it UK standar square three pin. Air-con in the rooms is excellent if a little noisy, but then again the ship engines are just as loud, so if you need quiet to sleep, bring along some earplugs. Pictures I'd seem of the Salamis Glory suggest the same price/class of cabin on that ship would have been more spacious, but I don't think I could really find any fault in our cabin on the Princesa Marissa.
Posted by GreedyGreen at 23:19