One trip that I would heartily recommend is the jeep safari to the Troödos mountains at Cy£35.00,which although more expensive than the Famagusta trip, seemed to pack a lot more in and was much more fun. We had 6 people plus the driver in the jeep with one inthe front, three across the middle seats and two on the sideways seats in the back. I don't know if they would try to pack another couple into the back in high season,which would make it too cramped but with our numbers it was comfortable enough. 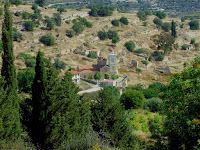 There were two jeeps on the trip and the first stop was soon after we got into the mountain area at a good vantage point for a view of the region, just to introduce both drivers and explain the program for the day. Our driver, Rico, and his sidekick Robin (introduced for the day as Adonis the god of love) kept the whole day quite jokey with their cheeky manner, which really made the day. We were asked to ensure we all swapped seats at each stop which was a good idea to give everyone a fair chance at the relative comfort levels of each seat - there were a few sore heads for those in the back on the off road sections. 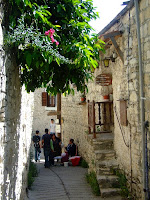 We then stopped at Omothos, which is the most visited of the Troödos villages that represents what Cyprus used to be like. So you have those narrow little streets lined with crowded stone buildings most now converted to tourist shops, but there's still some of the older generation women selling hand made lace from their chairs out on the street. Even though this is now a tourist spot, the character of the village is so much more laid back than the coast. The very shape of the streets and houses have an interest value you can't find in the bars and apartments that stretch along the coast highway. Basically, it's quaint - don't like to use the word, as it sounds like I'm a rich American visitor wanting to buy the place, but it is. The main square was bustling with the tourists and a school party, but it was still peaceful and radiated that charm of a life in the slow lane. Had we not been on the schedule of a day trip, I could have happily whiled away a few hours watching the world go by from a bar in the square. There's also a monastery in the village that's worth a look.
From Omothos, we went on for a wine tasting at the small Nelion winery (cyprusvines.com/nelion.htm). The lady there gave us the fastest tour of the wine making process I've ever encountered and then we sat down for tasting of the ten or so wines they produce. Most were pleasant but none grabbed me enough to want to buy, although my wife went for a bottle of their Grenache-Cinsault. 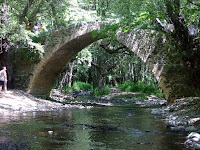 Onwards, via ashort break at a river ford with an old bridge (very picturesque) to the Kykkos monastery, which is the biggest and most popular in the area. The amount of gold inside is staggering and the walls are decorated with mosaic frescos of various religious scenes, much of the small tiles making these up also covered in gold leaf. 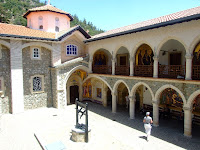 A fascinating place to look round it also left me a little cynical of a church hording so much wealth in a country that has tradionally a struggling population. This all hangs on the comment Jesus made to his disciples when they queried the cost of the ointment Mary had bought to wash his feet, the money for which could have fed many of the poor. Jesus said, "There will always be poor". Somehow this concept seems to be taken to a somewhat vulgar extreme in these places.
The lunch stop was next at the village of Prodromos which is the highest village in the Troödos. We didn't have time to look about if you wanted to eat but the lunch was a great buffet of traditional cypriot dishes such as mousaka, stifado, kleftiko etc and very good value at just Cy£5.00 per head including a drink and sweet. It's so nice to go on a day trip where you don't feel like you are dumped at an out of the way lunch stop with crap food at high prices. This was quite the opposite. 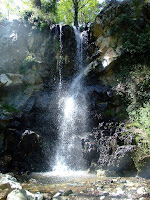 After lunch we went over to one of the waterfalls high in the moutains that is close enough to the spring to be flowing all year round. It was one of those idillic spots in the cool shade of the forest, the water cascading from the lip of the cliff, all of which a short 5 minute walk from the end of the dirt road where we left the jeeps. It had that secret grotto feel to it, and although Adonis went straight in to shower under the falls, he could only coax one other member of the group to do likewise as inviting as it was, no-one had thought to pack a towel.
Apart from a brief drive to the highest point for a look at the view (we didn't get out as the summit was swarming with flies) where you cant apparantly see 65% of the entire island, we then headed back down into the sauna like heat of the coast to be returned to our hotel.
The drivers, although very fun and lighthearted in their attitude were still very inforamtive and Rico was forever suddenly stopping the jeep to lean out and grab a sprig of sage, peppermint, lavender or a rose flower for us to smell that grew wild in the region. The wild roses are havested to make the rose water that goes over many of the cypriot desserts, and the herbs were so much more pungent than their shop bought equivalents. This was certainly a day to remember, made more so by the friendliness of a small group and humerous nature of the drivers, and one I would recommend to anyone.
Posted by GreedyGreen at 23:30