Getting from the boat, through security and to the coaches is your first taste of the Egyptian souvenier salesman. It's a bit like running a gauntlet of a haggling, hard sell mass of seething sales attack that doesn't take no for an answer. Don't try to give any excuses as to why you don't want to buy as they have an answer for everything, and by that point your in conversation with them and have to work twice as hard to get away. Just stick to repeatng, "No, thankyou", keep walking and get used to it, as where ever tourists are in Egypt, so are these sellers. Of course if you want to buy these souveniers just be ready to haggle, and this bit by customs is probly not the place you want to be held up.
It does pay a bit to be at the front of the queue here as you get on to coach number one (of a dozen or so) which give you a view of your army escort of four soldiers driving ahead. If you are one of the first to board you will be sitting on the coach for about an hour while the rest of the passengers get through the gauntlet to their coaches, but our guide, Hany, started his talk straight away and as he was both funny and informative, this did pass the time well, while we waited the hour and on the two hour drive to Cairo. 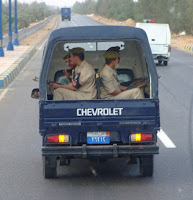 The coaches travel in convoy with both the soliders up front, a police escort and an armed security guard in each coach looking like CIA operatives - and when I say armed, it looks like a short stubby machine gun under their jackets, rather than a little pistol. At times all of this gets a little embarrassing as other traffic is pushed out of the way to make way for the all important tourists. Red lights are ignored, checkpoints are breezed through and you get the impression that the average Egyptian would probably resent the whole thing. It almost felt like a return to the days of empire, "I've got a British passport, and I'll go where I damn well please - out of the way, natives!" 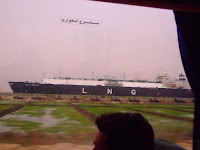 We drove out of Port Said and along the Suez Canal for a while before cutting away across the desert to Cairo. For the most part you cannot see the cannal, just the ships travelling along it which look very strange as if they are cruising the land rather than the water you know they are on.
At each checkpoint along the way the truck full of soldiers is swapped for new troops who only leave the convoy as you get into Cairo. 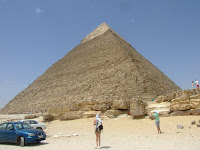 Assuming you don't breakdown enroute (although we were lucky on our coach, we were told 8 out of the12 coaches did breakdown and one of them couldn't be fixed by the team of mechanics that follow the convoy and had to be moved onto the backup coach that support team travel in), the first stop is the Giza plateau and the Pyramids. We parked between the Great Pyramid (7th wonder of the world and all that) and the second slighly smaller one which most people mistake for the great pyramid as it's more complete with some of the original smooth stone finish like a cap at the summit. Again you are beseiged by the souvenier sellers and here you also get the camel men who will invite you up onto the camel for your partner to take your photo and then demand money before they let you back down. Basically if anyone (even the police guys wandering about) offers any kind of favour, they'll want money for doing it - just say NO kids. The pyramids themselves are quite spectacular though and even in the 100+ heat I was content just to stand there 'being' in their presence. With only 30-45 minutes there I didn't go inside (another Cy£3 which you have to pay your guide first to convert into egyptian pounds) as I'm told it's just a long,hot,cramped and smelly tunnel leading to a bare chamber where you turn round and climb out again.
The great pyramid has the very top missing but a metal pole at the pinacle shows you the original height; it's not a radio mast or anything.
When the wind blows the sand whips up and stings any bare skin, but even with the sand, sellers, camel men, the heat and rip-off cops, it's worth it just to have been there. 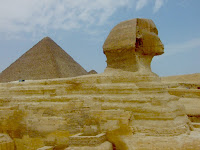 A couple of minute drive down the road and you stop again to get a close look at the sphinx for which you walk down through part of the ancient plateau complex for the best vantage point. As space here is a little more limited, it seems much more crowded than the pyramid area but it's a must fot those holiday snaps of the sphinx with the pyramids in the background. I would have liked a little more time to explore the complex but this is listed as a short photo break so although you don't have to rush as such, you really only have time to walk in, spend a couple of minutes to appreciate the view, take the snaps and leave again. This I guess is always the problem of doing day excursions as so much has to be fitted into the day that the whole thing seems to be a whistle stop tour.
From here we drove into Cairo itself, which isn't far - if you expected the pyramids to be solitary sentinals in the expanse of the desert, you'll be disappointed as they are right on the edge of the city. You get the impression it's only the existance of the pyramids that stops the city sprawling further in that direction.
The next stop is the Papyrus factory - or that's how it's billed. In actuality it's a shop where you get a quick demonstration of how papyrus is made and then half an hour to browse the papyrus paintings which will cost you anything from £20 for a very small one upwards. You then walk straight through into the 'department store' which is just a very big souvenier shop, where although there is no hard sell compared to the traders by the pyramids, you do end up with a staff member shadowing you the whole way round the shop to extol the virtues of any item your eye rests on for more than a few seconds. It's a shame that the staff don't realise that many of us are far more likely to buy stuff if we are leftalone to browse. As it was I spent most of my time trying to get away from the guy sodidn'treally look at anything properly. During the drive to Cairo the guide had taken orders for people that wanted 18c gold or silver cartouche pendants made up with your name in hyroglyphs and this is the store where you picked them up. My wife had a doublesided one made with both our names on which cost the equivalent of about UK£85. (go to www.meritbazar.com if you have a burning desire to order a cartouche or some papyrus or anything from Egypt.) 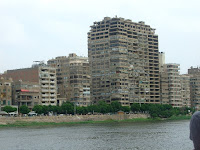 Lunch came next after a drive down to board a river boat which did an hour or so cruise on the Nile while you enjoyed a buffet lunch with the traditional egyptian dancers and musicians entertaining you in the background. The food was ptretty good and the boats really well decked out looking very much the floating restaurant. There was a small sun deck on the second level where you could get a beter view of the shore line but as this is a cruise within the very large city (Cairo has about twice the population of London) don't expect fields of papyrus and quaint fishing boats. It's more like towering shabby looking apartment blocks with mosques huddling between. Our guide who living in Alexandria, was obviously having an even longer day than us, took he cruise opportunity to sleep for an hour on a sofa in the boats reception area.
If you want a tilet break, these are probably the best bathrooms during the day, but expect to be held up entering while a staff member rushes in before you to give it a quick wipe round. As he lets you in he helpfully points out the door lock with his hand clutching a bank note to give the hint he wants a tip for the service - a hint I cheerfully ignored, it has to be said.
Onwards after lunch for our last stop of the day which is the museum containing, amoung many other things, some of the treasures of Tutenkamun's tomb. The most famous is the burial mask which if housed in the centre of a special air conditioned room together with the golden coffins much of the jewelery and the golden bands that bound up the mummy. The guide takes you on a tour round the important exhibits but is not allowed to go guide in this particular room itself. This is understandable as it would get too crowded with coach loads of tourists gathered round these exhibits in the small room when there are obviously the most popular attraction in the museum. The guide was very informative about all the exhibts we looked at, although with a whole coachfull of people crowding round each place he stopped you had the choice of either squashing in at the front were you can hear well and see the exhibit, or have a bit more space at the back where you just about get the gist of what he says and grab a quick look at the object in question as everybody moves on. Still the museum is fascinating and even with the hour and a half walking round this hot and humid building getting fairly footsore, I was glad to have seen all these treasure first hand that I recognise only from books and television.
Our guide got us all back onto the coach and left us (as his home was in a different direction) to make the long journey back to Port Said through the Cairo rush hour and on across the desert. 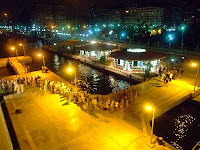 Even with our police and army escort clearing the road and running every red light infront of our convoy, it was still gone 8 in the evening by the time we were running that final gauntlet of souvenier sellers on the portside to reboard our ship.
The whole day is very tiring, made more so by the heat, but it was also one to be treasured. Hany was a superb guide who kept us interested while we were on the coach, many times dragging people up to the front of the bus to help him out (I made the mistake of answering a question about the Rosetta Stone and was dragged up to the front to explain to the rest of the bus everthing I knew on the topic). He had a great sense of humour and certainly made the day one to remember even without considering the sights we saw. The Giza plataeu and the treasures in the museum were all quite awe inspiring and in seeing it all first hand, it becomes easy to understand why ancient Egypt has captured the imagination of so many people from early romans garrisoned there (one famous piece of graffiti on a tomb wall reads "I woz here", sign by a roman soldier) to the modern day package tourist like myself. A fabulous and educational day.
Posted by GreedyGreen at 23:15

Hi tnere , this is Hany your guide .
wanted to say thank you for your nice words about me.
Thanks again