Kolossi Castle, Kourion and The Sanctuary of Apollo

Our last day and we decided we'd better go and see the local sites so we headed into Limassol where we had seen earlier that you can get a bus from outside the Limassol Castle that takes you to the Kolossi Castle and Kourion. When we got there and started to look at the timetable we were immeadiately accosted by a Taxi driver who said that the busses weren't running and he could take us round these sites plus the Sanctuary of Apollo for Cy£26.00 or Cy£32.00 if we wanted to include the 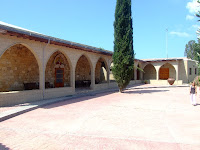 Monastry of the Cats by Akrotiri.
This being a Saturday and the sign saying "no service on Sundays and Bank Holidays" we said we'd rather wait for the bus. He seemed very confident that the bus wouldn't come and said he would still be here once we'd waited and even got the Taxi engine going to get the aircon on. So we waited until after the bus was due and thought about whether he was quoting a good price or not, and then having decided that Cy£32 was about what we would have paid for a day's car hire, that we'd take him up on his offer. Only at this point did he point out the bit of the bus sign we hadn't read which said "Monday to Friday"! Did we feel stupid or what?
Anyway, Nikos, the driver was an excellent bloke and gave us a bit of commentary as we drove down to the Monastry of the Cats first. His Taxi, like many, is a nice comfy Merc, and the aircon kept it cool. The monastry was quite small with just a single vault chapel but was very pituresque and the few nuns that work there tend the gardens round the back which indeed are full of cats - so if you're a cat fan, it's well worth a look. There was also a little shop attached were you could by some souveniers - many icons and the like - or leave a donation to help the upkeep of the cats. Aparantly the cats were brought over to Cyprus from Egypt and Palastine when the Monastry was built to help combat the many poisonous snakes in the area. 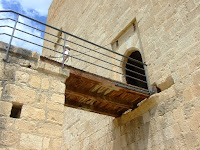 Here like at all the sites, Nikos left us be to explore by ourselves, suggesting how much time we would need to look about.
Next stop was the Kolossi Castle which is probably about the same size as the Limassol one but out in the countryside more. I love these castles so was happy to have a wander about exploring the rooms. It's basically three levels of pairs of vaulted chambers and has a very "neat and tidy" feel about the design. A narrow spiral staircase in the corner leads up from the first floor to the second and then out onto the roof for a view of the surrounding countryside. 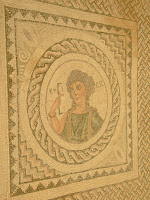 Once you've finished looking round there's a lovely little ramshakle bar by the ticket boot that sells drinks of fresh orange for just 50cents. It almost felt like just being on someone's porch and had we had more time would have been a very pleasant place to sit and watch the world go by.
Moving on to Kourion, this large site is probably the 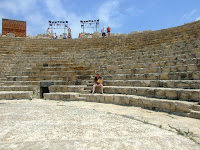 main tourist site in the area and starts with the covered section which was the bath house in roman times and this has an impressive set of mosaic floors on display. Next to this is the theatre which although not ancient is a recreation of what the theatre would have been like. The path from the bathhouse goes past this theatre and on over the road to the main site which spreads out for some distance and I thought that perhaps we should have had more than the hour that Nikos had suggested to fully explore. At the far end of the site is the House of the Gladiators so named for the mosaics of those fighters on the floor. A guide would be useful at this site as there is much to look at, but there are plaques dotted about to explain the various buildings. 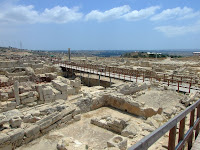 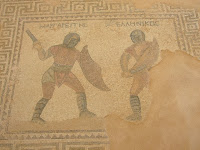 Most are at pretty much foundation level (although being roman the underfloor heating remains is quite interesting at this level anyway) but with a sprinkling of columns and higher walls about to give the site some shape and interest for those who aren't knowledgable about what they are looking at.
The whole site of Kourion is very well kept up and they have thoughfully provided shaded viewpoints in the grounds where you can sit and look at the view over the site itself or, as it is built at the top of a hill, across the landscape.
Our last stop was the Sanctuary of Apollo which although much smaller than Kourion itself, I found the more interesting site. A corner of the original temple has been reconstructed and enough of the main buildings still remain to get a good idea of what it must have been like originally. 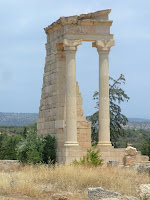 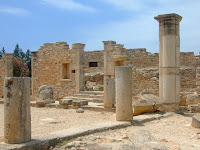 The whole trip only took about three to three and a half hours but I still think it was good value for money and would recommend Nikos as an excellent driver for excursions if you want sometime not quite as regimented and crowed as the coach tours. His number if you want to use his services is 99-419420 and his card says he gives a 24 hour service. All these sites are well worth a visit whether you do them on an organised tour, on the bus, or by taxi or hire car. If you can go early morning or late afternoon for the best pictures. We were there in the middle of the day so the sun being directly above doen't make for the best shadow contrasts.
Posted by GreedyGreen at 12:25

Great blog. All posts have something to learn. Your work is very good and i appreciate you and hopping for some more informative posts. прокат машин на кипре

Do you have the name of the Taxi Service? Thank you.