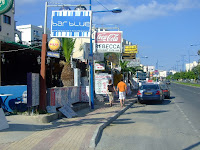 The hotel is on the landward side of the coast road. This is a fairly busy main dual caridgeway with a cycle path on the seaward side of it and he No 30 bus run along here to and from Limassol centre. The stop opposite the hotel is where you board going into town and it costs 80c per journey. Coming back you get off just past the hotel next to the Blue Bar
There is another row of hotel and buildings between the road and the beach and then a narrow 'promenade' path that runs along the beach which is popular with the joggers and power walkers in the cool of the evening.
The main road, or 'strip', has lots of bars, shops and restaurants along it, with many of these being 'brit' bars so don't expect this area to be at all the 'real' cyprus. There are however a few cypriot run places so you don't have to stick with egg'n'chips meals. The Kissos Taverna (http://www.kissos.com/) is a very good place where they have put a lot of effort into it, filling the dinning area with rockeries, small trees and flower beds, so even though it's on the main road, it was a very pleasant place to eat the more traditional cypriot cuisine. This was about a 10 or 15 minute walk turning left out of the hotel. Also for great food up in this direction and a little closer was the Danae Taverna (ferd1963@hotmail.com), where I had one of the best fillet steaks in a long time. Down the other way towards Limassol we tried the High Chaparral that has apparantly been open since 1968 and advertises itself as a "Famous Fish Taverna", but although we had meat rather than fish, we were very disappointed with the food.
There are a few bars and restaurants along the beachfront path, but a lot of this stretch is taken up by the big hotels with their residents only sunbed areas. One good one to base yourself at for a day on the beach is

Drops Bar which is a 5 or 10 minute walk along the beach towards Limassol. It's a little more expensive than on the main road but is quite chic with 'habitat-esque' style square thick weave chairs and chrome railings. The toilets are clean and most importantly have working locks. Sunbeds cost £1 per day and they don't charge you extra fot the beach brolley. They will serve drinks to take down onto the beach itself in plastic pint glasses.
The beach itself was a mixture of sand with a few strips of pebbles as you get into the sea, and is protected by lines of piled rock breakers about 100 yards out. A lifeguard post is just by the bar, ideal if you are drowning, or more often for the ladies to admire the occupants. With it's location on the south coast, the sun shines all day long without obstruction save for any unfortunate clouds.
Along the main strip one of the better brit bars is the Hamlet Pub, which is a faily large place that has lots of 'sink into', soft leather two seat sofas in the front (although we stopped using them as some as a big cockroach scuttled out from under our sofa one evening) and a roof terrace. They do a good range of drinks inluding Leffe blonde and brown for the belgian beer lovers.
Across the road is the Armonia cafe built into the paint peeled building of The Golden Beach apartments, but it has lots of tables and chair out on the grass under the trees looking out to sea for a quiter eveing drink. On Wednesday nights they have live music which was a traditional sounding Greek Cypriot singer when we went with his guitar. Nice soft background music that suited the peacefull suroundings under the pine trees.

Going left out of the hotel either along the road or the beach path you eventually leave the built up area and come to the archeologic site of ancient Amahous, an important city state in ancent times, which is worth a look. It's only Cy£1.00 to go in and it doesn't take long to look round as it not very big. There are a few infomation boards as you enter and then you wander down the path past the cordened off ruined foundations of square buildings and houses to the agora area where there is some reconstructed columns and the remains of a pepple mosaic floor. 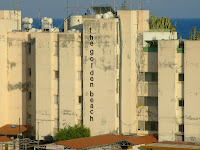 A podium affords you a view over the agora area with a plan marking out the various bath areas and storerooms etc. The one thing that is often remarkable about these places is that you can still see the drain systems that seem to be so much better than modern Greek plumbing - I bet the ancient greeks could flush their toilet paper down the loo!
However, my main impression of the whole area around the hotel is that there's little that is particulary aesthetic about it. None of it captivates the eye the way beautiful coves of Parga, or the sugar-cube buildings and maze like alleyways of Lindos do. Unfortunately a lot of the apartment blocks look very shabby as the paint (and in some cases the concrete!) has peeled off. What you 'need' is there - there's bars, restautants, supermarkets with sun, sea and sand, but nothing to take hold of your spirit to convince you that you just must come back again.
Posted by GreedyGreen at 23:56