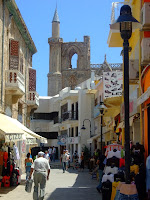 We joined in one of the tourist day trips to Famagusta in the Turkist occupied area of Cyprus which cost Cy£25.00 per person and picked up right outside the hotel. With all the other pickups, a 20 minute stop for coffee along the way and getting through the border checkpoint, it took about 2 and a half hours to get to Famagusta itself. During this time the guide kept up a running commentary on what you were to see and the history of Cyprus with particular attention to effect of the 1974 Turkish occupation. Our guide herself was one of those who 30 years ago had been forced to flee from her family home in the north.
Famagusta itself is a walled town with a few rabbling shopping streets in the centre where you can buy lots of (pressumably) knock off designer fake clothing, together with lots of bars and restaurants. The old cathedral, where the kings of Jerusalem 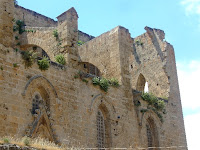 used to be crowned before going off to the holy land, has been converted into a mosque most obviously by the addition of a minurette tower on one corner. Whilst interesting to walk about the town with its old walls and buildings, rather than the romantic ruin feeling you get when visiting many historic places, Famagusta leaves you with a sense of neglect. The weeds grow unchallenged in the crumbling church buttresses, the windows of the cathedral are half bricked up, and the modern new shops selling t-shirts and souveniers so obvious catering to tourists nestle in between the l 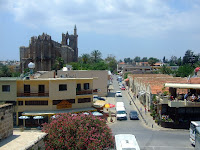 ocal shops with sparse window displays sporting the few products with age and sun faded boxes. The tour only gave you an hour to explore the town and you got a voucher for a can of pop at the bar by the coach drop off and pick up point, so if you wanted time to sit down for a drink, you only really had 40 minutes or so to walk round. Hence, we did not get to go and see the Othello tower, supposedly named for the play of the same name that refers to the sea gate in a cypriot port. As they cater for the day trippers from southern Cyprus, the bars are happy to take cypriot pounds as well as turkish lira, and will even give you change in the same.
Posted by GreedyGreen at 23:51