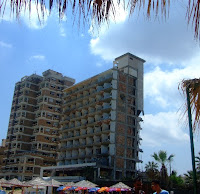 The second part of our day trip to Famagusta was a stop for lunch and a swim on the beach right on the edge of the border between the inhabited part of the town and the shattered hotels of the ghost town. The fence separating these ran right along the back of the beach bar we sat in and the ruined half of one of these hotels towered above he bar with twisted chunks of reinforced concrete hanging ominously on to the edges of great holes in the walls. One half of the hotel had completey gone leaving the inside of the lift shaft open to the elements like a great wound. This was the first of many hotels in a similar state that you could see stretched out along the bay like some Mad Max style parody of the Benidorm coastline. Guardposts were built into these ruins to stop trespassers and to ensure no photographs were taken - unsuccesfully it turns out, as even though it was forbidden, many people still took photos either seruptitiously (like myself with the camera hidden inside my bag and hoping it was pointed in the right direction - I still remembering watching Midnight Express!) or more openly.

The beach itself was beautifull with clear blue water and golden sand and to look left down the coast, you could have been in any carribean island with the grass roofed beach bar playing Bob Marley hits. But turn your head back, and the spectre of those shattered buildings reminded you of the ironic twist that what had once been the favourite of cypriot tourist destinations prior to 1974, was now popular again specifically because we can't go there any more. It was very strange indeed to be sitting in the sunshine enjoying a beer and a kebab, while others sunbathed and swam, beneath the crumbling testament to lives lost and the ruins of war.
After 2 hours stop at the beach it was back on the bus home to Limassol with a brief drive around the edges of the ghost town while the guide explained a bit more about the rapid abandonment by the Greek Cypriots ahead of the turkish advance.
For our guide this tour was part of her family life history and although I could appreciate her sadness at the sites, I felt somehow pressured by the days comentary to join in with the emotional journey, which made me feel a tad uncomfortable, as even though all war causes grief and misery, as an outsider I did not have the attachment to the events to either ignore the arguements on either side of the confrontation or feel the horror at the loss of life. These were hotels and houses and in the modern west we do not have the same sense of 'belonging' to places with many of us choosing to live far from where we are born and grew up. Unlike the ruins of Nazi gas chambers which, when you visit, stab into your very soul as they are the actual constructions of death and mass slaughter, these segregated, guarded and abandoned buildings could have been any town and are more eirie than disturbing.
Posted by GreedyGreen at 23:50